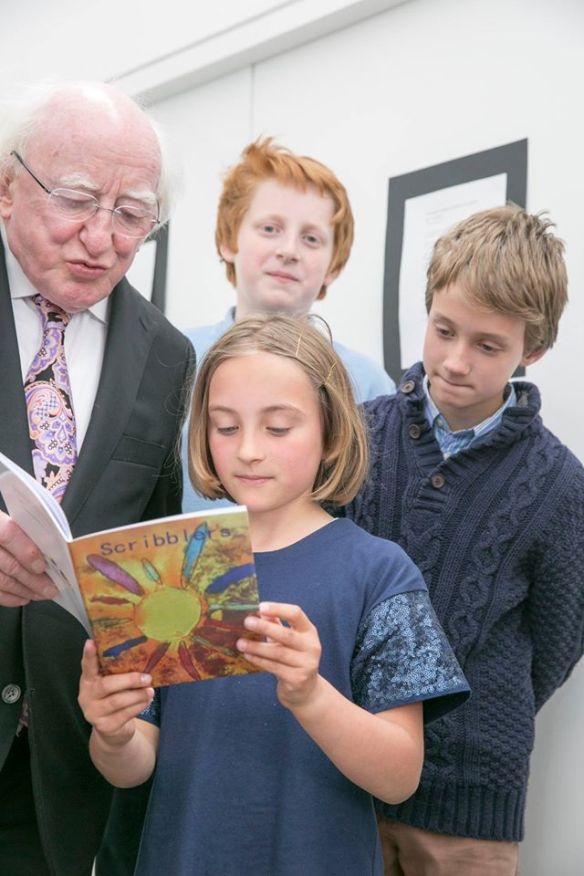 So, we’ve had the president’s visit, (here’s one of my young writers reading to President Michael D. Higgins from the magazine of poems we produced) and the Uillinn Arts’ Centre is now officially up and running. Very exciting to see the regular transformations, as things change all around me. The fabulous organza gown, the hundreds of names embroidered in squares on a pair of tapestries, have been and gone, along with Tess Leak’s magical ‘I shall build for myself a castle’ series of giant drawings and artifacts. 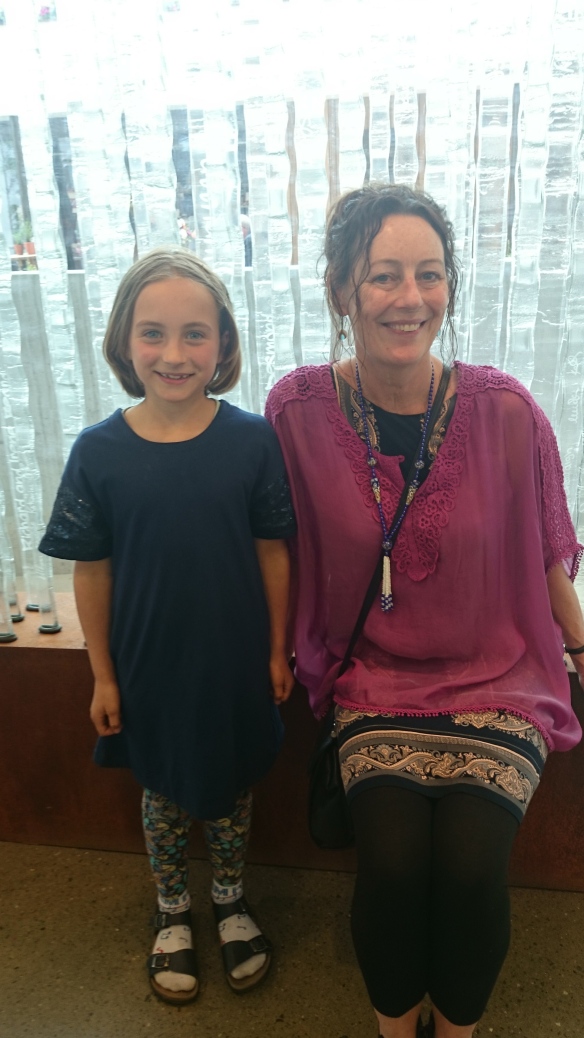 Lucija and I are sitting in front of the fantastic permanent sculpture by Michael Ray who is one of Ireland’s most rated glass artists. My new neighbour and fellow artist in residence is Toma McCullim, from Scotland, who is replacing American artist Al Zaraba, who SHOULD have been here, but unfortunately was taken ill on arrival in Ireland and is currently recuperating in Galway hospital. But he’ll be with us shortly. Meanwhile, we have the glorious Toma, who invited me to visit an archaeological dig going on at the site near where the old workhouse used to be. We met the professor from Maryland University with his students (coincidentally, Al Zaraba is also from Maryland). We also came across a memorial plaque to 22 year old Patrick McCarthy at the site where he was shot by guards in 1922 for being a dissident. That’s bound to work its way into a poem!

As well as a staircase poem, Toma’s own project also includes artifacts that have naturally rusted – and what do you know? On our wanderings, we came upon a whole collection – like a found exhibit – nestled in a field! Toma had her conceptual way with these objects and they are now on display in a stairwell. Also poem material for me!

The wonderful thing about being ‘in residence’ is the serendipity of what occurs. Socialising with Toma and Justine Foster, who makes things happen here, and also Rita and Jackie. As I’m in Skibbereen at the moment, a friend from UCC gave me a ticket to see the Galway Druid Theatre Company’s magnificent production of FOUR Shakespeare plays, back-to-back. Six hours of Shakespeare – and it flew. (We did have breaks for drinks and even dinner, provided by Riverside Café). Their next performance is in New York. Also, thanks to meeting Toma, I ended up in Levis’s pub in Ballydehob to hear the haunting Aboriginal music of Frank Yamma, with David Bridie, from Australia. Fantastic.

The opening of the Members’ Exhibition was a massive affair – as well as sculptures, there were over 300 paintings wonderfully hung  – and it was followed by a spell-binding poetry performance by Canadian/ Indian poet – Renée Sarojini Saklikar, whose ongoing project involves the Air India crash in West Cork in 1985. The audience participation was very moving.

Throughout my stay here, I’ve been so impressed by Emma Jervis’s extraordinary photographs of events, candid moments, beautifully captured. Wow. The Centre is so lucky to have her. She’s archiving an impressive visual diary of Uillin’s events and exhibitions.

As for me? Well, it’s been a frenzy of editing and writing – and next up is Teen Camp! I’ll be offering an intensive three-day workshop from the 8th to the 10th July. As I’ve discovered that teenagers are writing novels these days (why not?) the focus will mainly be on structuring, pacing, adding layers to character and using metaphor to bring language to life. The short story and poetry won’t be neglected either. The best novelists, in my view, are natural poets.

And that, sadly, will bring to a end my residency here. But I will be doing a reading of poems created during my time as Poet in Residence at the end of the month. And there will be Autumn courses on offer