What’s the first thing you notice about a stranger?

Today, for my third session at Bantry Day Care, we talked about how our own nature selects the details that please us most. That might be appearance: height, size, hair colouring, clothing, etc, or personality: gestures, body language, smile, handshake. Or voice: timbre, accent, tone, delivery, form of expression.

I asked a friend of mine to come and distribute brochures about the festival, and chat about what was happening. When she left, I challenged everyone to tell me what they had noticed about her. Not surprisingly (as she was young and attractive), the men in the room had absorbed a great deal, even perceiving attributes such as intelligence, confidence, education level etc. They remembered her name, clothing, height, quality of voice, body shape (‘slim’) and their only mistake was taking her for an English person. She’s from Cork, but is well-spoken. In the minute or so that they had to gain an impression of her, they managed a character profile that would have impressed an investigator! We talked about how in interviews, an employer would have decided intuitively whether to employ the person within thirty seconds. 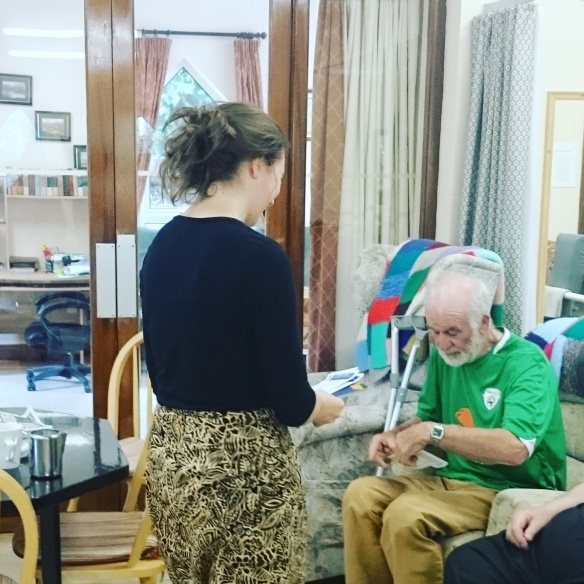 We talked about first crushes and what attracted us to that person. There was much hilarity as one woman told us she chose a man who was ‘short and stout’ but owned the farm next door, and that was his attractive quality! She married him. Others went for people who were ‘kind to all and sundry’ rather than their looks. I was very touched. Another man said he chose a girl in London, where he was working, ‘not for sex or anything like that, just to keep the loneliness away.’ I imagined loneliness as an ogre bearing down on him. So many moving stories too. It was an honour to hear them.

We also talked about language, and how we use clichés. We collected a list of these. One surprising one was ‘quick as a ferret.’ And I really liked ‘hunger is the best sauce.’ They told me things that their parents used to say to them, such as ‘if you fall, don’t wait to get up.’ And a quirky Irish expression that translated as ‘praise the youth and they will come.’

We talked about ‘characters’ we had known. From the conversation, and with the help of Yvonne, who assisted as a scribe, I extracted lines to create a pantoum:

I remember a travelling man coming to our house

made up songs on the spot, anything that was happening.

Scott Skalahat, as we called him, looked old to me.

He had nine fingers and a very small foot.

Made up songs on the spot, anything that was happening,

and took me poaching salmon.

He had nine fingers and a very small foot,

walked down the road in the ladies’ heels my sister gave him.

He took me poaching salmon.

My father would give him breakfast in the morning.

after he made flowers from crepe paper, and I cut his hair.

My father would give him breakfast in the morning,

the travelling man who came to our house.

After he made flowers from crepe paper, and I cut his hair,

Scott Skalahat, as we called him, looked old to me.