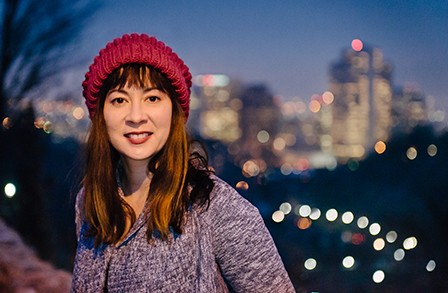 Quick swim up through my headlights: gold eye
a startle in black: green swift glance
raking mine. A full second
we held each other, then gone.
Gone. And how did I know
what to call it? Lynx, the only possible
reply though I’d never seen one. The car
filling with it: moonlight,
piñon: a cat’s acrid smell
of terror. How quickly the gray body
fled, swerving to avoid
my light. And how often
that sight returns to me, shames me
to know how much more this fragment
matters. More than the broad back
of a man I loved. More than the image
of my friend, cancer-struck, curled
by her toilet. More than my regret
for the child I did not have which I thought
once would pierce me, utterly. Nothing
beside that dense muscle, faint gold guard hairs
stirring the dark. And if I keep
these scraps of it, what did it keep of me?
A flight, a thunder. A shield of light
dropped before the eyes, pinned
inside that magnificent skull only time
would release. Split back, fade
and reveal. Wind
would open him. Sun would turn him
commonplace: a knot of flies, a rib cage
of shredded tendon, wasp-nest
fragile. The treasure of him, like anything,
gone. Even now, I thumb that face
like a coin I cannot spend. If I ever lived,
I lived in him, fishing the cold
trout-thick streams, waking to snow, dying
when he died, which is a comfort.
I must say this. Otherwise, I myself
do not exist. It looked at me
a moment. A flash of green, of gold
and white. Then the dark came down
again between us. Once, I was afraid
of being changed. Now that is done.
The lynx has me in its eye.
I am already diminished.

I had the pleasure of meeting Paisley Rekdal and hearing her read at the Cork International Poetry Festival a couple of years ago, and have her riveting collection, The Invention of the Kaleidoscope. She grew up in Seattle, Washington, the daughter of a Chinese American mother and a Norwegian father. She earned a BA from the University of Washington, an MA from the University of Toronto Centre for Medieval Studies, and an MFA from the University of Michigan, Ann Arbor. She is the author of the poetry collections A Crash of Rhinos (2000), Six Girls Without Pants (2002), The Invention of the Kaleidoscope (2007), and Imaginary Vessels (2016), as well as the book of essays The Night My Mother Met Bruce Lee: Observations on Not Fitting In (2000).

In reviewing The Invention of the Kaleidoscope for Barn Owl Review, Jay Robinson observed that it’s “the razor’s edge that always accompanies eros that makes the poems of Paisley Rekdal fresh, intense and ultimately irresistible.” Rekdal’s work grapples with issues of race, sexuality, myth, and identity while often referencing contemporary culture.

Rekdal has been honored with a National Endowment of the Arts Fellowship, a Pushcart Prize, a Village Voice Writers on the Verge Award, and a Fulbright Fellowship to South Korea. Her work has been included in numerous anthologies, including Legitimate Dangers: American Poets of the New Century (2006) and the 2010 Pushcart Prize Anthology.

Rekdal teaches at the University of Utah. In April 2013, Rekdal was a featured writer on Harriet.

(This bio comes from the Poetry Foundation.)

2 thoughts on “Driving to Santa Fe by Paisley Rekdal”